Hydrocarbons enter the sea at a rate of about 1000 million liters every year, mostly from natural seeps. A wide range of microorganisms is able to metabolize petroleum hydrocarbons to harvest energy and carbon. While much is known about the physiology of microbial hydrocarbon metabolism in surface waters, there is a lack of knowledge concerning hydrocarbon metabolism at deep-sea conditions.

Countless environmental and biotechnological processes depend on this missing information. Following deep-sea contamination, the fate of spilled oil, how it may or may not enter the food chain, and its persistence in the environment is unclear. This information is crucial e.g. to assess the long-term impact of accidental spills, especially when occurring in pristine environments not adapted to oil. Bioremediation is the ultimate solution for hydrocarbons degradation, however, there is no clear indication how to support it at deep-sea conditions.

Microbial activity in oil reservoirs is responsible for souring (i.e. the accumulation of H2S, which limits the lifetime of off-shore infrastructures and represents a serious hazard for workers), microbially-induced calcium carbonate precipitation (one of the processes involved in scaling formation which clogs pipelines), microbially-induced corrosion (also impacting off-shore infrastructures lifetime and safety operation). Microbial activity in deep reservoirs is also explored for microbially-enhanced oil recovery to decrease oil viscosity and facilitate oil extraction. Understanding how to deal with such microbial resources would prevent or lower the shipping and use of expensive and toxic chemicals used nowadays.

The group of Engineered Microbial Systems aims at understanding the metabolism of oil degraders at deep-sea conditions using microbial resources derived from natural seeps and oil reservoirs. These communities are naturally adapted to both using oil as carbon and energy source, and to deep-sea conditions of hydrostatic pressure and temperature. The ultimate goal is to reveal the principles that make these resources efficient oil-degraders under deep-sea conditions, and to develop biotechnological strategies to apply these principles during actual oil spills. 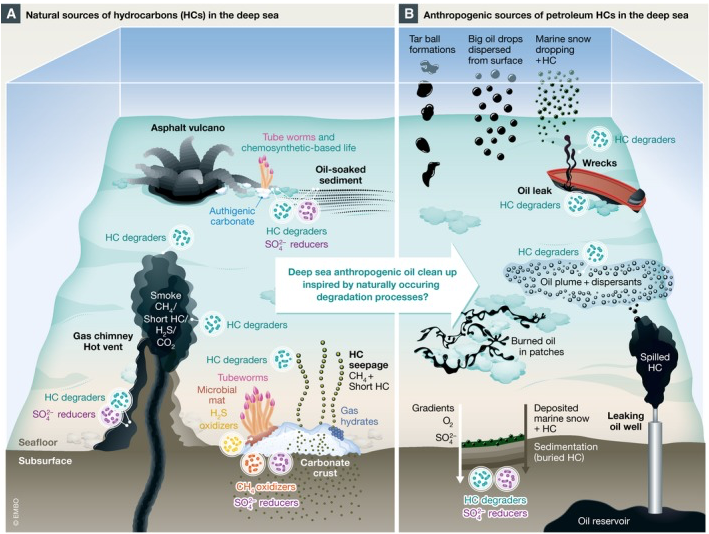 A pivotal goal of the 17 United Nations is to increase renewable energies production. Lignocellulose, a most diffuse bioresidue, is largely used for the production of biofuels and chemical intermediates. Due to its inherent properties, several physicochemical pretreatments were developed to enhance lignocellulose digestion. Despite the high productivity of some, such pretreatments are energy intensive, substrate-specific and can inhibit the succeeding biological steps (i.e., enzymatic hydrolysis and microbial fermentation).

Enzymatic cocktails are routinely used to enhance industrial bioethanol production, yet the wide spectrum of polysaccharides in nature is hardly covered. As a result, easily fermentable plants are preferred over waste biomass, stressing the food vs.fuel dilemma further.

The digestive system of wood-eating animals is a natural resource of enzymes and microbes optimized for lignocellulose degradation, as shown in termites. Ethology is a testament to how evolution heterogeneously shaped animals’ behavior and biochemical capacity to withdraw energy from lignocellulose. The gut microbiome of such animals harbours numerous microorganisms and enzymes adapted to lignocellulose fermentation.

The group of Engineered Microbial Systems aims at identifying both microbial members and enzymes in gut microbiomes which are efficiently degrading lignocellulose. The research aims at retrieving these resources in a pure form and further improve their biocatalytic capacity. The ultimate aim is to design or implement industrial processes using lignocellulose as a feedstock within a circular bioeconomy model. 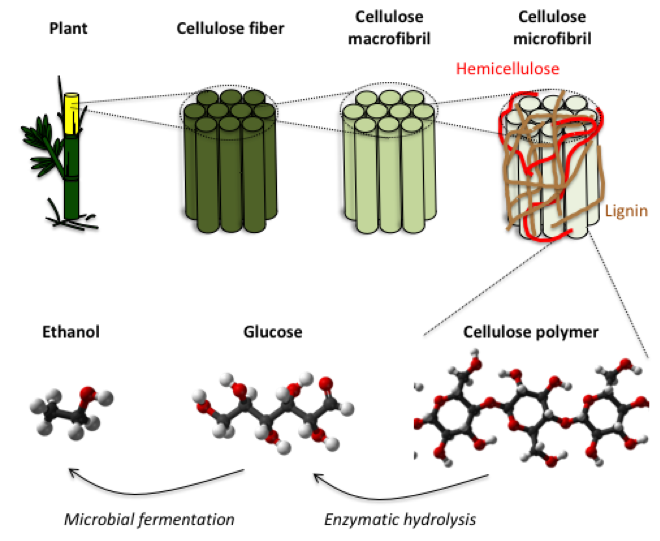 RELEVANT PUBLICATIONS IN THE FIELD